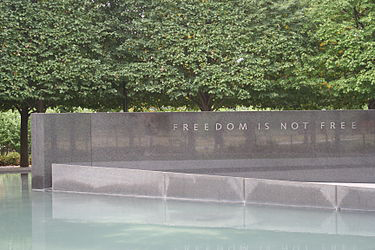 My wife’s father was missing in action the day she was born. Lt. Col. Ray Davis and his Marines were busy rescuing Fox company from certain annihilation during the legendary battle of the Chosin Reservoir during the Korean conflict. Happily, her dad not only rescued Fox company, survived, and came home, but was awarded the Medal of Honor by President Truman for his fearless leadership and heroic service.

My father-in-law remained extremely active following his retirement from the Corps as a four-star general and Assistant Commandant. Perhaps his most gratifying achievement following active duty was chairing the committee that designed, funded, and oversaw the construction and dedication of the Korean War Veterans Memorial on the Mall in our nation’s capital.

The South Korean ambassador to the United States spoke at the General’s eightieth birthday party, and acknowledged his remarkable achievement rescuing the survivors of Fox Company. But his true success, he maintained, was in holding narrow, mountainous Toktong Pass, the only exit from the reservoir, open for three days, enabling an estimated 250,000 Koreans to escape the Communist north and live and prosper in the freedom of the south.

As we celebrate America’s 242nd birthday this month, it is appropriate that we honor not only those who actively serve to protect the freedoms we enjoy in this nation, but to remember and honor those who enabled others to do so as well.

Dentists are typically well prepared to care for their patients through excellent clinical training, but are grossly underprepared to own or operate a small business in today’s changing and challenging marketplace. Learn valuable real life lessons in this dynamic and fast-paced program which will touch on many of the factors necessary to operate your practice successfully.