Shortly after marriage, my wife and I moved into an apartment, and I started dental school in the fall of 1974. Across the street from our complex was a “starter home.” It was a small, two-bedroom, brick house, and it was for sale. The price? Twenty-thousand dollars.

While dining one weekend with my in-laws, the topic of the house came up and we toyed with the idea of buying it instead of paying a monthly rent. We knew we could afford the mortgage payment, but we lacked the money for the two-thousand dollar down payment. Soon the conversation changed to another topic.

After dinner, my father-in-law invited me to join him in his study for a quiet conversation. He was keenly interested in the purchase of the house and offered to loan me the money needed for the down payment. Regardless of the obvious advantage of accepting his help, I allowed my pride to get in the way, and turned down his generous offer. As a new member of the family, I wanted to assure my father-in-law that I could take care of his daughter. Not only was that stupid, but I didn’t even discuss the issue with my wife, whose opinion was equally important.

A month passed, and the little house was sold. In truth, I felt that I had allowed an enormous opportunity to slip by. Had this house become available later in my marriage, it would have been easier to accept the financial help.

In 1978, I graduated from dental school, and sought a bank loan to open my first office. Working with a local dental supply company, we determined that I would need $40,000 to purchase used equipment, establish my initial inventory of goods and instruments, and have proceeds available to cover cash flow while becoming established. Fortunately, I qualified for the loan, and began my clinical career.

The irony of all this, was that the house we didn’t buy, sold the week we moved out of our apartment. The sale price? Sixty-thousand dollars. In other words, had we bought the house in 1974 for $20,000 and sold it four years later for $60,000, I wouldn’t have needed a bank loan to open my practice. Amazing!

If there is a moral to this story, it’s to recognize that it’s okay to accept help from time to time, especially from family. It’s equally important to have open and honest communication with one’s spouse. It’s impossible to know how our lives would have been different had we accepted my father-in-law’s generous offer, but it’s safe to say that it was an opportunity lost. 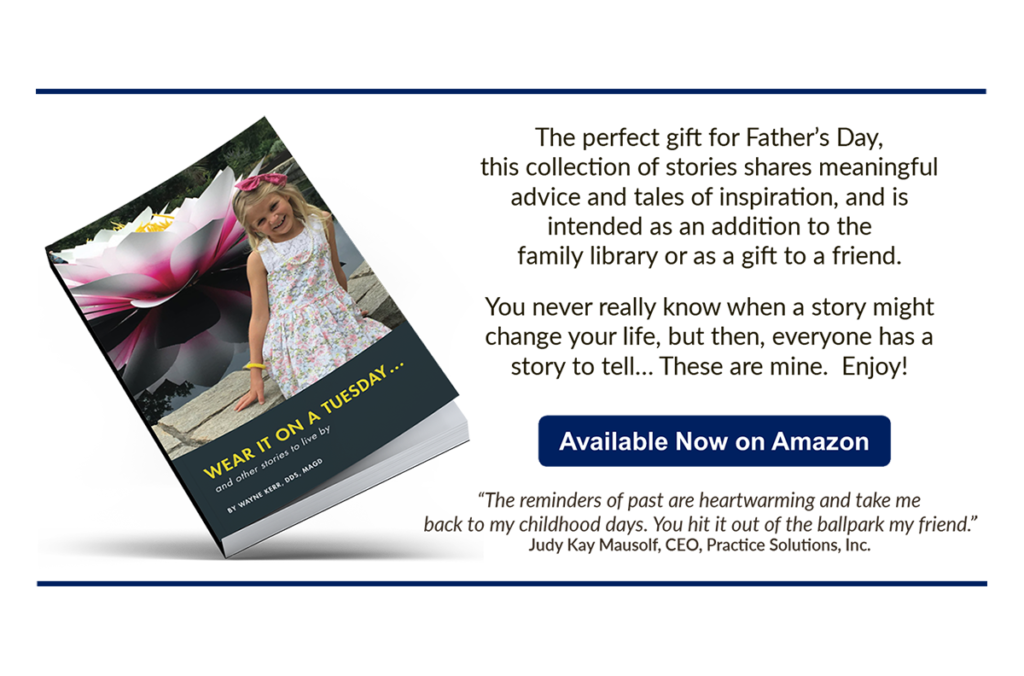 “Nothing is more expensive than a missed opportunity.”
H. Jackson Brown, Jr.