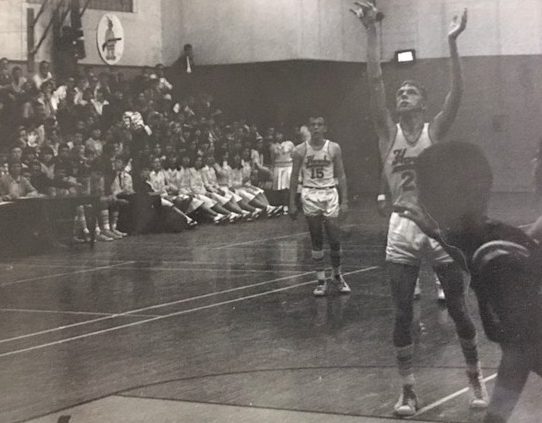 I’ve been the hero, and I’ve been the goat.  Rest assured, I much preferred being the hero!  I’ve made the shot at the buzzer to win, and I’ve missed the shot that would have made us victorious.  Such are the variables of sports, and life.

Those who know me would find it hard to believe that I was ever introverted, but it’s true.  It was my seventh-grade PE coach, Dale Rider, a former U. S. Marine, that took me from being a pimple-faced nerd with few friends, to being a popular, confident, first-string, all-county basketball star.

Coach Rider was a firm believer that boys should grow into men through hard physical exercise and team sports.  Although he was demanding, we respected him highly, and soon found that we could do fifty push-ups instead of five, one-hundred sit-ups instead of ten, and could run a mile in seven minutes instead of seventeen.  By, howdy, he turned us into believers!

By playing basketball for Coach Rider, I learned far more than just how to play the game.  Through his watchful guidance, I grew in self-confidence, became a leader, and learned the value of teamwork.  Great life lessons for a young teen!

By the time I graduated high school, I had earned multiple letters in swimming, track, basketball, cross-country, and crew.  Never did I fail to recognize the value of coaching, and the importance of team work; lessons which served me well throughout my adult life and business career.

If you’re struggling with your business, find a coach or consultant who can help identify the key issues holding you back, and provide the training necessary to move forward.  Take it from me, a great coach can change your life!

Choose from Dr. Kerr’s most popular topics listed below, or contact our office to learn more about customizing a presentation for your next meeting.

“Boys, we’re not as good as they are,
but we’re stronger, faster, and in better shape.
Keep the game close, and we’ll
run ’em to death in the second half.”